Each half term, our children will reflect on their learning and share their experiences in words, pictures, photos, video and audio files. Look out for their first reflections at the end of this half term. 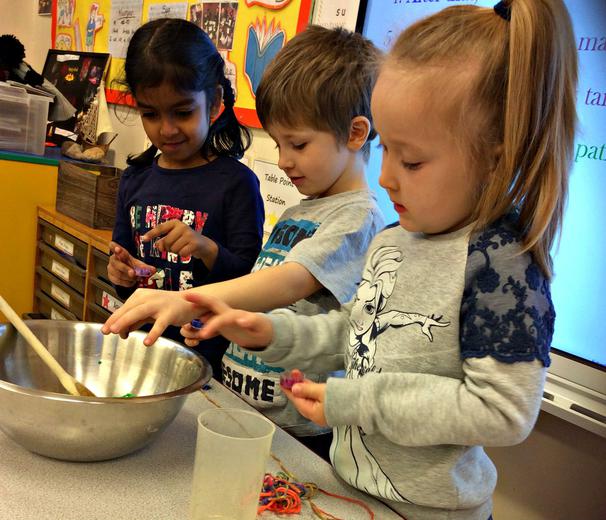 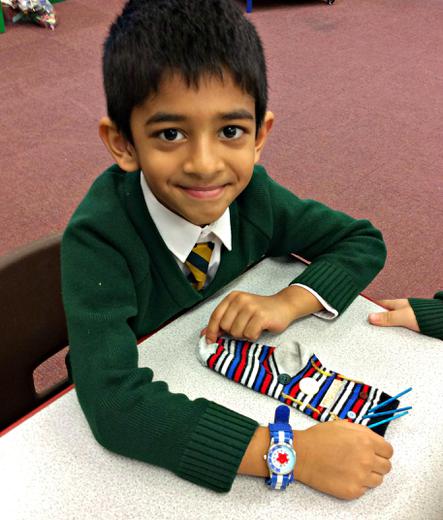 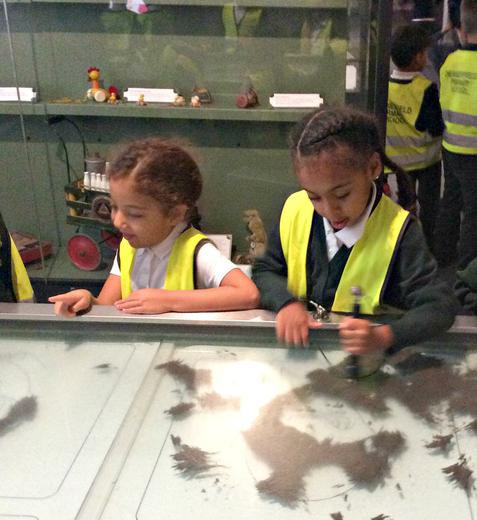 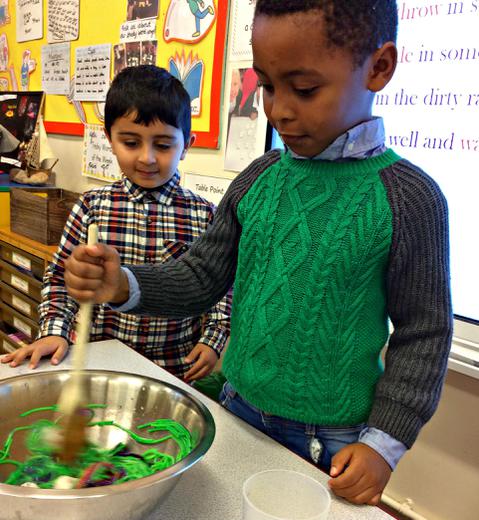 Visit from the mysterious creature!

During the Summer Term, Year 1 had to put their investigator hats back on as they received a breaking news report asking them to write a non-chronological report about some very strange happenings in the school. All of the children did a great job and were able to include a title, subheadings, photographs and facts in their reports. The children discovered lots of evidence left behind in the classrooms by the creature like glitter from a faraway land, food that the mythical creature had eaten and CCTV images of the creature in all the Year 1 classrooms!

Trip to The Steam and Water Museum

Year 1 were lucky enough to visit the Water and Steam Museum. All of the children had so much fun taking part in informative workshops throughout the day based on their topic of water. They travelled back in time to the Victorian era and learnt the process they would have gone through to wash their clothes. They even got to dress up and tried it out for themselves! Year 1 were then taught how water is filtered and completed an experiment as a group. The children also had the opportunity to learn about the germs that can be found in dirty water. Everyone loved their time at the museum and learnt lots of interesting facts and information about water.

Nevaeh 1CR – “I loved playing in the water area because there were lots of things for us to explore.”

Mehereen 1CR – “I liked seeing all of the dirt and germs in the dirty water through the microscope.”

Sarim 1CR – “I liked learning about how people washed their clothes in the past because it was really different.” “

Loretta 1V - “I liked the splash zone because we got to test out different ways to trap the water!”

Ryan 1V - “We learned about how to filter water using stones, gravel and sand in a funnel!”

Saachi 1V - “We dressed up as people from the olden days and practised cleaning water with old fashioned equipment.”

During Arts Week, it was amazing to see the enthusiasm from the children as they all got involved with art, music, drama and dance across the week. Year 1’s learning for the week was based on their given theme of ‘Into The Jungle’. Throughout the week the children worked hard on improving their art skills to create a fabulous final piece. As well as this, the children took  part in engaging drama lessons, energetic dance workshops and magical music lessons. Year 1 were even able to take part in an exciting ‘Junk Orchestra’ workshop in which they created music with junk instruments such as bike wheels and water bottle drums with terrific results.

One of our favourite Year 1 topics is when we get to learn all about people who do amazing things and are really important - we call them significant people. 1CR loved the topic so much that they even based their class assembly on it! Some of the fantastic people that we learnt about included Florence Nightingale and Neil Armstrong. The children even had the opportunity to meet Florence Nightingale. She explained how she helped the soldiers during the Crimean War and how she improved hospitals. The children enjoyed dressing up and exploring some objects from the past.

Zayn 1R - My favourite part was when we got to act out the scene of the soldier and Florence Nightingale.

Ethan 1CR - I enjoyed looking at the different objects from the past.

Tommy 1V - I loved dressing up and doing some acting.

Anaiya 1V - We got to see some medals from a long time ago that people won for being brave.

As part of the topic, Year 1 designed and made some very special badges for a significant person of their choice. They all looked brilliant and reflected the children’s fantastic knowledge. Take a look at some of them in the gallery!

Year 1 has had lots of fun weighing and comparing a range of classroom objects using non-standard units. They also became experts on using key mathematical vocabulary such as heavier, lighter, balanced etc. They were also able to make predictions about how much they thought an object would weigh and even record their results in tables! They are all becoming mathematical masters!

As we have been learning all about animals this term Year 1 had two very special visitors. They were lucky enough to meet a pet expert (Mr Kidd) and his lovely dog Nina. Mr Kidd was able to tell the children lots of interesting and useful tips about how to best care for pets. He even bought in a few of Nina's things to show them, like her lead and even her toothpaste! The children were able to show how much they had learnt by creating eye catching posters and very informative fact files about how to care for pets.

Chloe 1CR: we had so much fun when the pet expert came in to talk to us about how to take care of pets because we got to stroke his dog called Nina. I learnt that you should brush and stroke the dog starting from their neck down to their back.

Parshva 1CR: I loved it when Mr Kidd and his dog came in because I got to feed Nina a dog treat and Mr Kidd told us that we give treats when dogs do something good.

Alvy 1V: I enjoyed learning about Nina and also got to share what I know already about looking after dogs!

Ronnie 1V: I had a practice at picking up a dog’s mess, there’s a special way you have to hold the bag.
Isabella 1CR: Mr Kidd told us that all pets need exercise so he takes his dog for a walk twice a day.

Let’s go on a safari

Everyone loves to explore and Year 1 were able to get all dressed up in their best safari outfits to take a trip into the wild (with a bit of help from their very vivid imaginations). They crossed the dangerous stream full of scary crocodiles and humungous hippos jumping across stepping stones. Year 1 also had to wade their way through gloopy, oozy quick sand. They even spotted a herd of grey elephants in the distance! Once they made it safely back into school, they wrote fantastic recounts of their trip using time adverbials and noun phrases.  Have a read of a few below.

During the first half term of the year children became toy experts (as if they weren’t already) and learnt all about toys through the years. Year 1 had the opportunity to visit The Victoria and Albert Museum of Childhood and explore some of the toys from the past and compare them with toys from today and even got to be part of toy workshop where they met some of the oldest teddy bears. Here’s some of the children’s thoughts from the trip: AJ – “I loved looking at the fast train. It looked so real”. Noah – “There was a huge robot that moved when you turned the cogs.” Chloe- “We took turns going on the old fashioned rocking horse. It was so fun!”

Year 1 children were recruited by Elf Rosie to design a brand new toy as the elves had run out of new ideas for their Christmas workshop. The children loved thinking of exciting, fun toys to show to Elf Rosie and came up with some amazing ideas including a musical fidget spinner and the world’s fastest remote control car! The children even had the chance to market their new toys and create colourful and eye catching posters to promote them.

Year 1 all transformed into magical wizards and mystical witches to create their very own spooky and enchanted set of instructions on how to make a potion as the famous Winnie the Witch had lost her own. Every child had a hand in helping to make the final potion for each of the classes which included everything from the beautiful, multi-coloured hair of a unicorn to the poisonous spots from a toad’s back!

Anti- bullying week – Something Else

Year 1 loved their learning during anti- bullying week which was based on the story of Something Else. In response children created self-portraits capturing different emotions and used warm and cool colours to reflect this. Year 1 also wrote diary entries and discussed how Something Else felt when he was being bullied and how he felt once he had made some friends. The children all learnt the qualities of being a good friend and that although we all may be different we are all amazing!

Helping your child at home

In phonic lessons children are taught to read by breaking down words into separate sounds or ‘phonemes’. They are then taught how to blend these sounds together to read the whole word.​ Try some of these fun games at home with your child to support them in their phonic learning;

Year 1 enjoyed their first Spring walk to the park. They saw buds of flowers and made predictions about what they will grow into. They used an identification grid to help them name the plants they saw, and particularly enjoyed watching little robins flying in and out of their nests! What signs of Spring can you spot?

Addison: I was looking for purple crocus'

David: It was much warmer today!